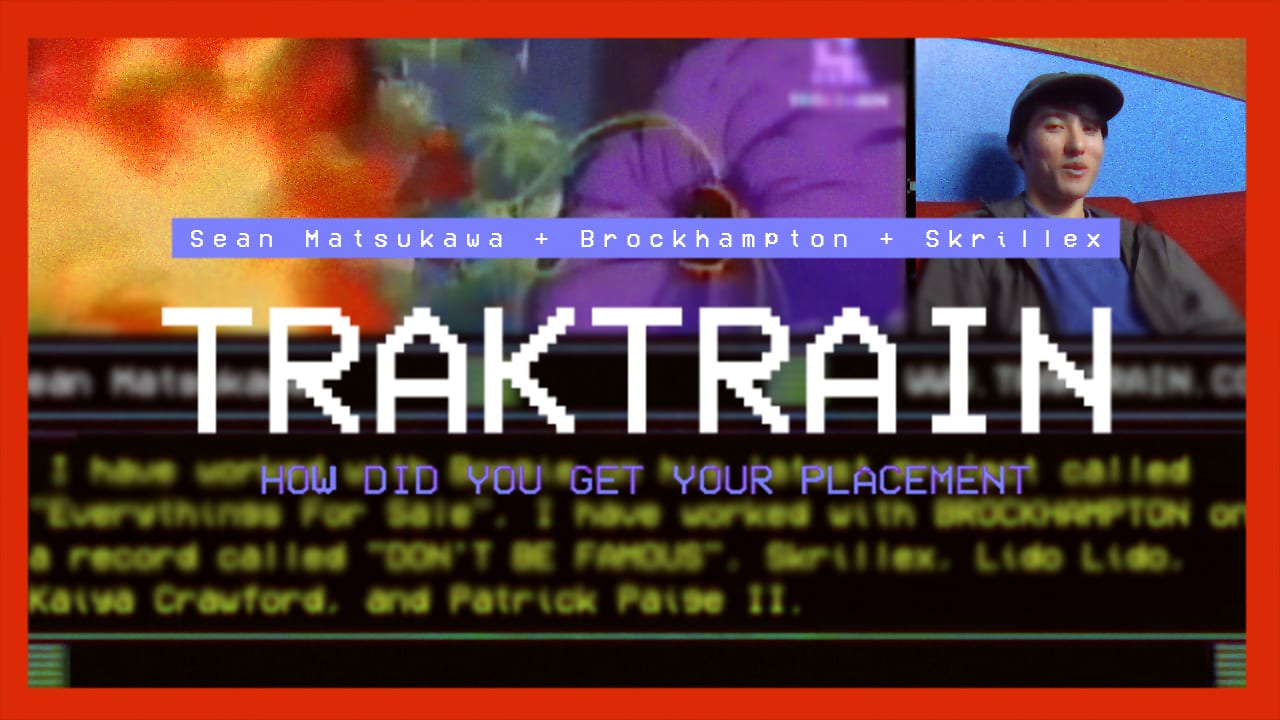 How Did You Get Your Placement Sean Matsukawa Ep. 14

Sean Matsukawa, music producer from North Torrance, CA, who worked with Boogie, BROCKHAMPTON, Skrillex, Lido Lido, Kaiya Crawford, and Patrick Paige II, tells us the story on how he managed to work with them.

I’ve met artists through different walks of life — whether it was through going to school with them, whether it was having a friend of a friend refer them to me, or somebody came across my stuff through Twitter or Instagram, or I contacted somebody via Twitter or Instagram as a fan — very different ways. For Boogie at least, I met him on Twitter and I produced for some people in his circle including artists like EPICMustDie and A$ton Matthews and for A$ton — A$ton had a big amount of buzz locally at the time and a lot of people had their eye on him and I got kinda lucky with that placement and Boogie & I have been in contact since “Thirst 48” part one, before that album actually, so we’ve known each other for awhile. We kind of lost touch, just given you get older, you grow apart — you know he signed his deal and got bigger and I was doing other stuff with other artists and I accidentally ran into him at the park and we exchanged phone numbers and he started hitting me up to come to the studio to work on this latest project and yeah, that’s kind of how it came about.For the Boogie situation, I was contacted by Boogie to start coming to the studio to help work on this album and ironically none of the work I did coming over to the studio got placed on the record — it was all the work I did away from the studio. So what happened was, for “Skydive” at least, “Skydive” — the guitar parts and the bell part — the main parts in that song, the melody, the melodic elements that I contributed to derive from a beat that I made for my album, my solo album initially that got scrapped but I still used it for background for a skit on my project. Boogie’s engineer Dart — shoutout to Dart — listened to my project and asked me what that beat was in the background of the skit and I told him “It’s this beat I scrapped, I couldn’t really write lyrics to it, nothing popped up in my head but I still used it for the skit” and I was like “You think Boogie would like it?” and he’s like “Yeah” and I’m like “Okay” so I sent over the stems for that beat and they took what they wanted to take; it was the two guitars, the bell — the synth bell melody on it and they put their drums on it and other elements and that became “Skydive”.
For the BROCKHAMPTON record, it was a little bit different. I’ve worked with them in person, I’ve known some of the guys for awhile. I found out that that record was coming out the day of when it came out. One of the producers Jabari, contacted me telling me that they planned to use it for the Beats1 Radio show that day — they had like a compilation of songs that they weren’t going to put out officially, like through distribution and stuff but they just wanted to put them out somehow, and “DON’T BE FAMOUS” happened to be one of the songs on the episode.

The first time I heard parts of “Skydive” were through Boogie’s story and his live Instagrams where he would be in the studio, he’d be playing some records and stuff — this is probably a year and a half before the album came out. So, that was like the first time I actually heard him on the record, like I could hear my guitar part in the back and I was like “Oh okay that’s it — that’s tight”. I heard the final version of the record about two months before the album came out.

As for “No Warning” that situation came about because Dart, again, asked me if I could play some bass parts on the song — they pretty much had the record done already and they just asked me to add some bass parts to it, I did some passes and then I added some guitar parts too that didn’t make the cut and then I found out — well the first time I actually heard the record in its entirety was when it came out, so I didn’t really know which parts were going to make it and which parts weren’t, but that’s the first time I actually heard the record.

“DON’T BE FAMOUS” again, I heard the final version of the record the day of on the Beats1 show so that was kind of exciting.