The New Wave of Ethan Ross

With an outrageous visual aesthetic of a Jewish kid with bushy red hair, Ethan Ross is ready to carve himself his own lane in the music industry. His fame on TikTok and his YouTube videos have followed him alongside his unique singing ability. His personality is so down to earth and relatable that you actually forget that this same dude makes some of the freshest and ear-piercingly songs this year. Not taking himself seriously on social media, you will find Ethan casually strolling into high schools and freestyling with a Bluetooth speaker on hand. I mean, who else has the balls to do that, AND kill it at the same time? 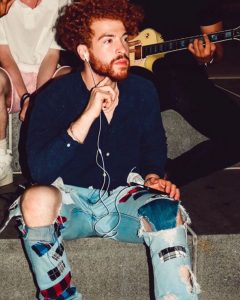 1 year ago his song “agave” was his first post on Soundcloud. One of many. His sound selection on pretty much all of his songs is totally unique in texture and ambience. A mixture between trap with melodic ambient lo-fi seems to be a staple in Ethan’s music that keeps popping up time and time again. All of his songs are mixed in a laid-back, chill, smooth fashion which goes along perfectly with his down-to-earth, singing voice. You will actually not find one song of his that sounds the same. He seems to effortlessly slide from Zay 808 hard trap beats to beats even Post Malone couldn’t sing on. His projects feature such a wide sonic range it is hard to believe he doesn’t have a whole team behind him helping out with composition.

His latest song “tidal waves” starts swimming in a sea of ambient tears with spaced out pads and washed out vocals. It comes in and progresses into a beautiful bass complementing the crisp drums. It seems to me he is letting out a couple of demons of his on this song as he battles with some pretty personal topics such as relationship trouble and his gratefulness for life. It is a shame this song only has 1K plays at the time of writing because more people would be blessed to hear this song.

Ethan Ross is scheduled for nothing but stardom in my honest opinion. Someone with such amazing singing talent, beat selection and composition cannot stay hidden for too long before being picked up by someone. I highly recommend you check out his latest song “tidal waves”, “cocaine (5am) and his latest EP entitled “feverdreams”.