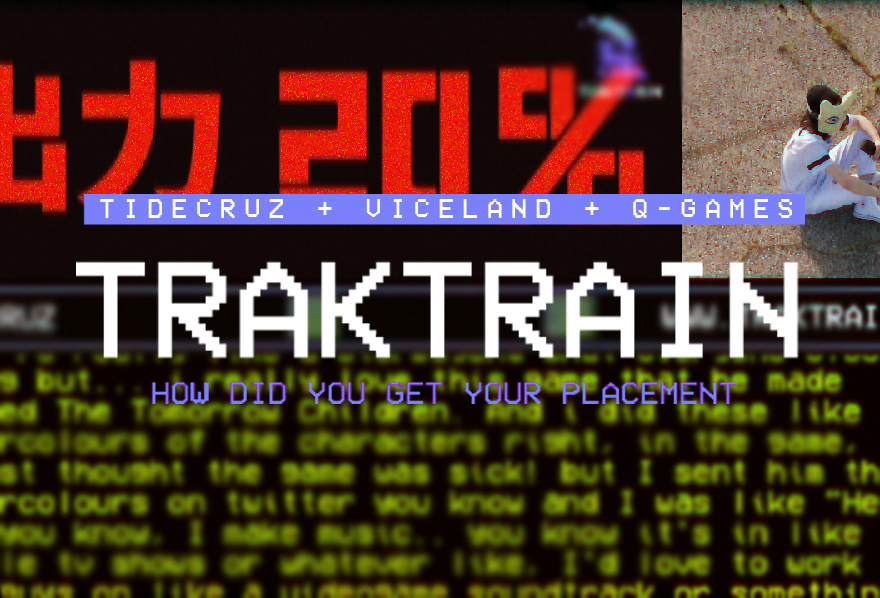 How Did You Get Your Placement TIDECRUZ Ep. 17

Tidecruz, music producer from Kansas City, who worked with Viceland, Q-Games, and Adidas, tells us the story on how he managed to work with them.

What’s up to you guys, this is tidecruz doing my Traktrain interview! Let’s just jump right into it. So I’m tidecruz, I’m from Kansas City. Not really a huge music scene here, but you know. I’m trying to make something happen.

I’ve worked with a couple of companies now, Viceland. It’s like the VICE TV network. They got a tv channel, that’s pretty cool. There are some of my songs in a show called Tattoo Age, and another show called Payday. So that’s pretty cool. I actually don’t have that channel, cause I don’t have cable, but my parents saw it! And (laughs) they thought it was pretty cool. My mom sent me a text she was like “Oh my god! There’s your name on TV” you know? Ha. That’s awesome. Yeah, but I did check it out later online it was pretty sick. And yeah so, it’s on those two shows.

Joseph Procopio, he’s a filmmaker (and director/scriptwriter) from Canada. And he wanted to use some of my songs in this movie he was making, and when I found out that Sean Astin was in it I was like Wow. .. like that’s really cool. you know, I used to watch Rudy, and The Goonies, and all those movies he was in, and even Stranger Things now you know he was Bob like… I thought that was sick like… being in the same thing as Sean Astin, dang I was like that’s… that’s awesome. So of course, I agreed right away! So that came out, you guys can check that out if you want, it’s called eHero, it’s a really cool movie, you know especially if you like gaming. the whole movie is about gaming. and yeah it’s just really cool. Check that out for sure. Speaking of gaming. This video game company from Japan called Q-Games. It’s owned by this guy Dylan Cuthbert right? and Dylan, he was the one who made the GameBoy happen back in the day, Starfox; All these games that we all love. He leaves Nintendo right and he goes and starts his own game company and like, the games they are making… they’re just something else. You know, they’re really like a step beyond what everyone else is doing but… I really love this game that he made called The Tomorrow Children. And I did these like watercolors of the characters right, in the game, and I just thought the game was sick! but I sent him the watercolors on twitter you know and I was like “Hey man you know, I make music.. you know it’s in like a couple tv shows or whatever like, I’d love to work with you guys on like a videogame soundtrack or something. And got back to me and was like, “We’re actually, we’re making this game called Monsters Duo right now and you know we’d love to have you do the soundtrack for that” So for the last year or so we’ve been working on that and that’s been pretty sick! Never would have thought that like, you know.. I was playing my Nintendo 64 back in the day playing Starfox, and now I’m working with the guys who made that happen like, that’s pretty sick. Adidas, they wanted a couple tracks for a documentary they were doing about basketball and like, self-expression and identity, determination; all these different like intricate parts of what goes on in basketball. and so I got the tracks in their documentary, and I thought that was pretty cool. So all these people like, they just sent me an email or whatever, and they said they really like my stuff and they wanted to work together, so I just wrote back and said, of course, like – I’m down.

I remember the first uh, Viceland thing that happened it the show called Payday. and yeah, my mom checked that out and she -laughs- she sent me a picture of my name in the credits and I was like “alright you know, things are happening, like, this is sick.” So everything after that was just like a matter of signing some paperwork and checking it out a little bit later when it went on TV or wherever it was going.